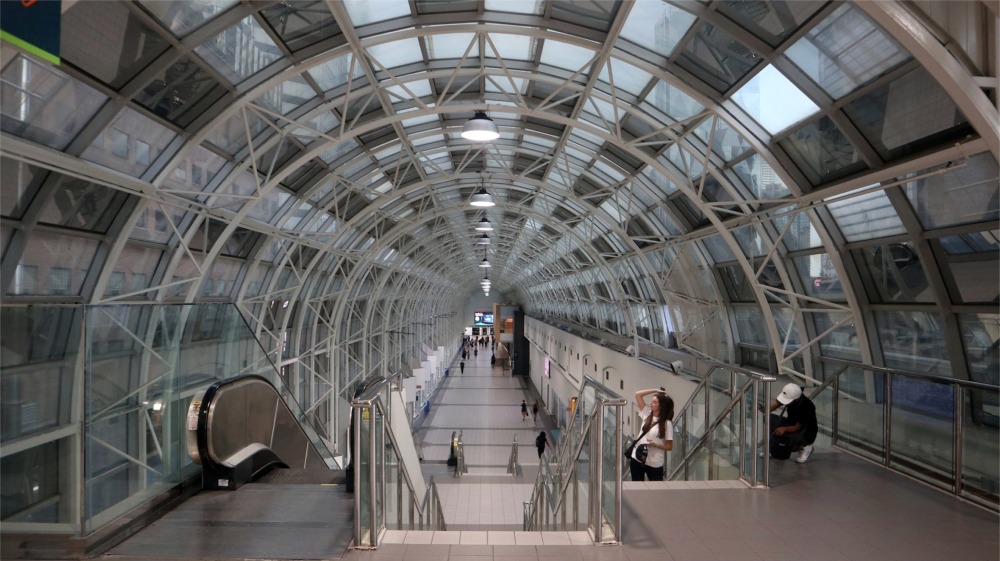 Skywalk provides a sheltered environment in the bitter-cold Toronto Winters. In addition to serving as a place of transit, it's a meeting place for people to commune with others.

The SkyWalk is an approximately 160-metre enclosed walkway connecting Union Station to the CN Tower and the Rogers Centre (SkyDome) in Toronto, Ontario, Canada. Part of Toronto's PATH network, the SkyWalk passes above the York Street 'subway' and the Simcoe Street Tunnel and runs roughly parallel between Front Street and Bremner Boulevard.

Designed by the IBI Group,[1] the SkyWalk was opened in 1989 as a predominantly indoor connection from Union Station to the SkyDome. The primary purpose of SkyWalk is to reduce the need for additional parking spaces near the stadium by providing a direct transportation link to the subway and GO Transit regional trains. A post-modern curved metal and glass structure, the SkyWalk was the first major construction project in the former railway lands after the CN Tower.

On 17 July 2014, the Toronto Preservation Board passed a motion recommending that Toronto City Council allow the demolition of the SkyWalk to make way for a 48-storey office and retail tower called Union Centre.

On 6 June 2015, the Union Pearson Express station was opened within SkyWalk.

The SkyWalk begins at the western end of Union Station and first runs through the York Street Tramway, which runs above and parallel to York Street. It then passes through the second and third stories of the Canadian National Express Building, a heritage-listed property completed in 1929, which acted as a terminus for horse-drawn carts delivering goods from Union Station.

The SkyWalk then assumes the form of a long arcade, running parallel to Station Street. Along the southern side of this corridor, the main section of SkyWalk is the terminus station for the Union Pearson Express rail link to Pearson Airport, which opened in 2015. GoodLife Fitness occupies the lower floors of the Canadian National Express building and extends beneath the arcade.

At the western end of the arcade, the SkyWalk rises onto an elevated walkway and crosses the rail tracks leading into Union Station and Lower Simcoe Street on a north-south, then northeast-southwest alignment, with a connection to another walkway leading to the Delta Hotel and Southcore Financial Centre. It becomes east-west adjacent to the upper level of the Metro Toronto Convention Centre, with a direct connection to the South Building and a bridge to the North Building.

The enclosed walkway terminates near the base of the CN Tower, behind the Ripley's Aquarium of Canada. From here, a short walk in the open air leads to the Rogers Centre and across Bremner Boulevard to Roundhouse Park.

From east to west: