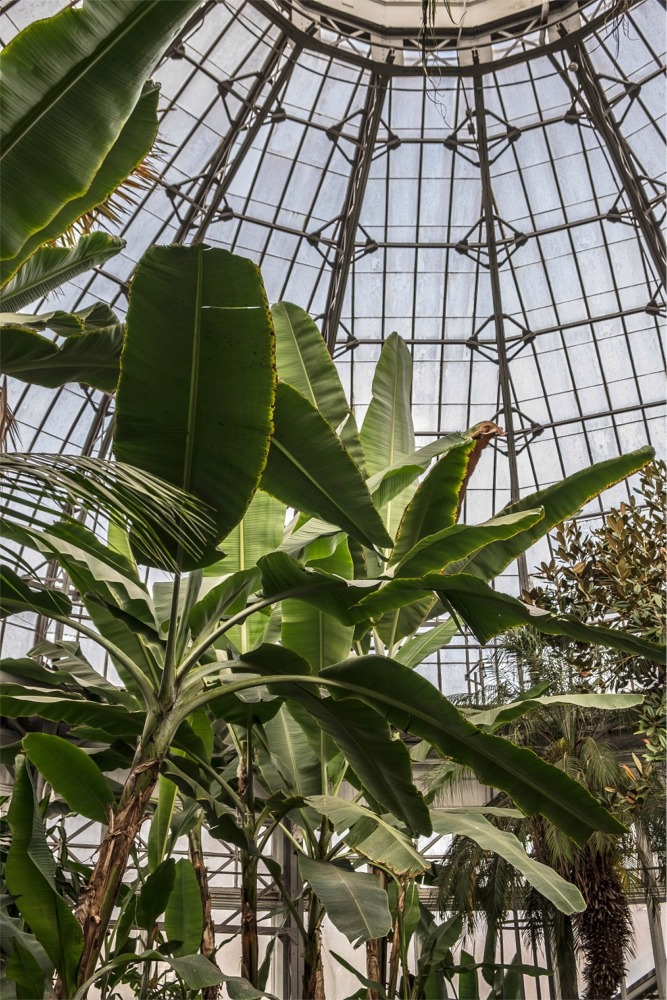 The interior of the Allan Gardens Children's Conservatory in Toronto, Ontario, Canada.

Allan Gardens is a conservatory and urban park located in the Garden District of Toronto, Ontario, Canada. The property includes a playground, an off-leash dog park, and a 1,500 square metres (16,000 sq ft) conservatory with six greenhouses.

The park originated from lands donated to the Toronto Horticultural Society by George William Allan in 1858, with the horticultural society officially opening gardens there in 1860. In 1864, the municipal government of Toronto acquired the lands surrounding the gardens, although allowed the horticultural society to maintain it in return for permitting its public use. The conservatory was later acquired by the municipal government in 1888. The park and the gardens were initially known as the Horticultural Gardens until 1901 when it was renamed after Allan. A fire ravaged and destroyed a three-story pavilion at the park in 1902. However, a new conservatory building, the Palm House was later completed on the property in 1910. The park has become a popular gathering place for protest since the mid-20th century.

The property initially formed a part of Park Lot V, one of a series of properties that were subdivided by the authorities after the Toronto Purchase in the 1790s. In 1819, William Allan acquired the property, and he later built his Moss Park estate there. His son George William Allan, who served as the 11th mayor of Toronto and as president of the Toronto Horticultural Society, inherited the estate after William Allan's death in 1853. In 1855, Allan subdivided the land, although he retained a private garden north of Gerrard Street.

In 1858, shortly after Allan's tenure as mayor had ended, he gifted the horticultural society 2.0 hectares (5 acres) of land for them to develop a garden, although this transaction was not finalized until 1861. The Horticultural Gardens were opened to the public on 11 September 1860, with the Prince of Wales (later Edward VII) planting a maple tree in front of the pavilion. Alongside Queen's Park, which was also opened earlier that day, the two parks are the oldest parks in Toronto.

In 1864, the property surrounding the gardens and conservatory was acquired by the municipal government of Toronto for C$11,500, to be used as a municipal park. The city provided a lease to the horticultural society, where the society agreed to maintain the grounds on the condition that they are publicly accessible and free of charge until 8 p.m.; after that time, the horticultural society was free to use the property to host charged-private events.

The original rustic wooden structures were replaced in 1879 with a new three-story pavilion to be used for concerts, gala balls, conventions, and flower shows. Construction of the new pavilion was financed through a C$20,000 mortgage taken out from the horticultural society. Because the horticultural society was unable to cover its debts, the conservatory was later sold to the municipal government in 1888. In the following year, iron fencing and gates were added to the park.

In 1893, the National Council of Women of Canada was established inside the Horticultural Pavilion of the gardens. In 1894, the garden's original conservatory was replaced. Shortly after the death of Allan in 1901, the gardens were renamed from the Horticultural Gardens to Allan Gardens in his honour. The pavilion was eventually destroyed in a fire on 6 June 1902. Shortly after the fire, a statue of Robert Burns was installed at the park on 19 July.

A structure to replace the pavilion was commissioned by the municipal government at a cost of C$50,000 after two more expensive proposals were shot down by the government. The new glass and iron-domed conservatory, the Palm House, was completed in 1910. In the 1920s, two more greenhouses were added to the conservatory. An additional wing, which included three greenhouses, was built in 1956 and 1957 in order to expand the garden's exhibition space. During the 1950s expansion, the garden was also expanded, its fencing and gates were removed, and its fountain was replaced. During the 1960s, the property was enlarged, with the lands vacated by Jarvis Collegiate Institute absorbed by the park. The park was expanded again in 1990 after the city expropriated the Larry's Hideaway hotel along Carlton Street.

The park emerged as a popular gathering ground for protest during the mid-20th century, with the Workers' Ex-Servicemen's League first staging a protest at the park on 16 August 1933, in order to protest the treatment of veterans from the First World War during the Great Depression. Attempts were made by the Toronto Police Service to disperse the 1,000-person crowd, citing a by-law that restricted public protests to three designated public parks in the city. The by-law was later revised to include all parks after anti-war poets held "unauthorized readings" at the park during the 1960s. After rumours that a Nazi rally would take place at the park, an anti-Nazi crowd formed at the park on 31 May 1965, and eight individuals were beaten by a crowd after they were mistaken for neo-Nazis.

In 2003, the University of Toronto and Toronto-Dominion Bank financed the construction of a sixth greenhouse for the conservatory, named the Children's Horticultural Conservatory. The greenhouse was built by the university in order to house specimens held at the university's old greenhouse on College Street. The park was also among several municipal parks occupied by protesters during the 2010 G20 Toronto summit protests.

Allan Grounds is a municipal park and conservatory maintained by the Toronto Parks, Forestry, and Recreation Division. The park is also supported by the Friends of Allan Gardens, a community support group for the park. The park occupies about a city block and is bounded by Carlton Street to the north, Sherbourne Street to the east, Gerrard Street to the south, and Jarvis Street to the west. In 2008, an assessment of the park revealed that there were 309 trees planted on the property; representing approximately 47 species of trees. The park includes an off-leash dog park, a playground, and a conservatory. The park includes a system of pathways that cross the property, including a north–south pathway that links Carlton and Gerrard Street; as well as an east-west pathway that links the conservatory with the Robert Burns Monument and Sherbourne Street. In June 1973, the park was listed on the City of Toronto Heritage Property Inventory.

The conservatory was initially built in 1909 by Robert McCallum in a neo-Classical and Edwardian style. The building featured a brick-clad base with sandstone detailing; with stone, wood, glass, and iron also being used as building materials for the structure. The building feature a 16-sided glass and steel dome topped and a cupola topped with a finial; although the steel was later replaced with aluminum. The Palm House also includes a boiler room and chimney.

In addition to the Palm House, and the greenhouses, the conservatory also includes an administrative building erected in 1923. A central oval with a drinking fountain that commemorates Graeme Mercer Adam was originally situated east of the Palm House; although this was later replaced with a pergola in 1995.