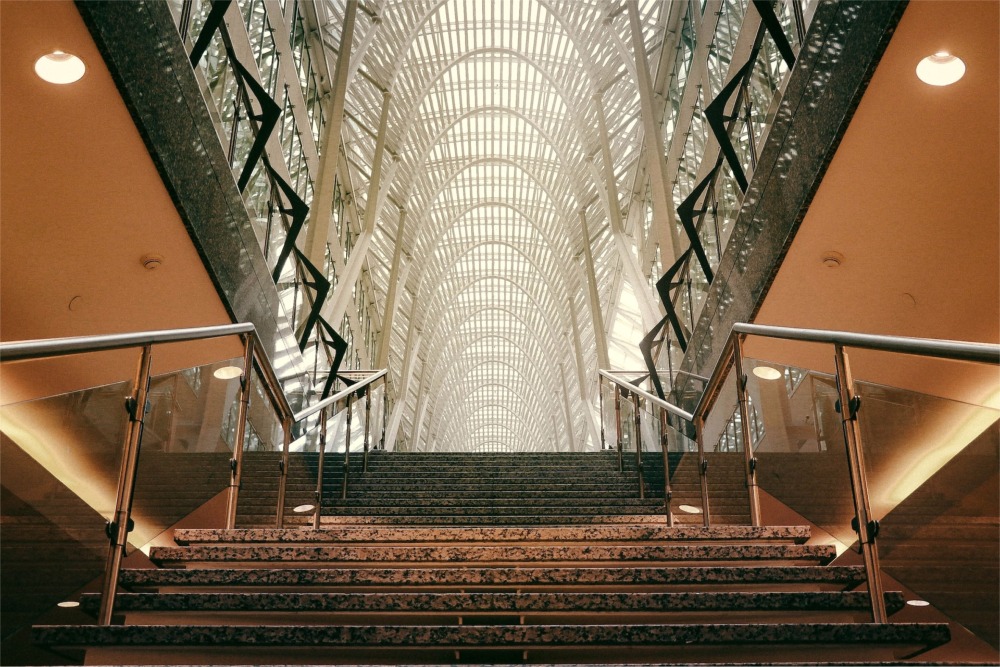 This is a splendid photograph of the Allen Lambert Galleria in Toronto, Ontario, Canada. The lighting, colour, stairs and handrail in the foreground frame the Galleria highlighting its architectural and artistic beauty.

Allen Lambert Galleria, sometimes described as the "crystal cathedral of commerce", is an atrium designed by Spanish architect Santiago Calatrava which connects Bay Street with Sam Pollock Square. Structural Design was completed by Yolles Parnership Inc., while the General Contractor was PCL Construction and the Structural Steel was fabricated by Canron Construction Corporation. The six-story high pedestrian thoroughfare is structured by eight freestanding supports on each side of the Galleria, which branch out into parabolic shapes evoking a forest canopy or a tree-lined avenue because of the presence of building facades along the sides of the structure.

The Galleria was the result of an international competition and was incorporated into the development in order to satisfy the City of Toronto's public art requirements. It is a frequently photographed space and is heavily featured as a backdrop for news reports, as well as TV and film productions.

The parabolic arched roof that Santiago Calatrava created for the assembly hall of the Wohlen High School in Wohlen, Aargau, Switzerland, is generally considered to be a precursor of the vaulted, parabolic ceiling in the Galleria.

Brookfield Place serves as the headquarters for Brookfield Properties, which owns the Bay Wellington Tower section of the complex. The TD Tower section was owned in entirety by the Ontario Municipal Employees Retirement System (OMERS) through its subsidiary Oxford Properties.[14] In late 2012 or early 2013, OMERS and an unconfirmed entity identified in news reports as the Public Sector Pension Investment Board (PSP) completed a swap transaction in which OMERS reduced its ownership stake in the tower to 50%. According to the Financial Post, "A spokesman for PSP would not confirm the deal had taken place, noting the pension fund never comments on any transaction." The swap valued the 50% stake in the tower at C$465 million, or C$750 per square foot, a record for commercial property in Canada.

The opulent former Bank of Montreal branch at the northwest corner of Yonge and Front streets, built in 1885, also forms part of the complex, and now serves as part of the Hockey Hall of Fame. It contains portraits of all Hall of Fame inductees and houses a number of hockey trophies, including the first Stanley Cup trophy.