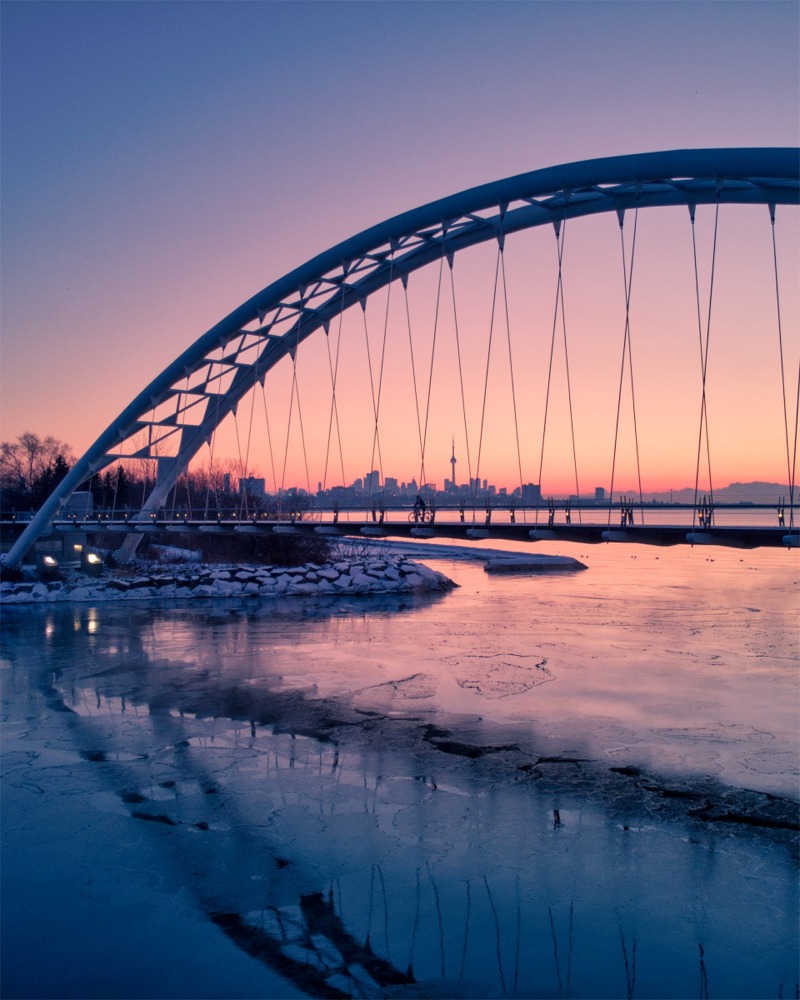 Photograph of the Humber Bay Arch Bridge in Toronto, Ontario, Canada. In the winter photo, we can see the CN tower through the arch and a cyclist on the bridge.

The Humber Bay Arch Bridge (also known as the Humber River Arch Bridge, the Humber River Pedestrian Bridge, or the Gateway Bridge) is a pedestrian and bicycle through arch bridge south of Lake Shore Boulevard West in Toronto, Ontario, Canada. Completed in the mid-1990s, the bridge is part of the Martin Goodman Trail and is 139 metres (456 ft) in length, with a clear span of 100 metres (330 ft) over the mouth of the Humber River to protect the environmental integrity of the waterway.

The bridge is constructed of two 1,200 millimetres (47 in) diameter high-strength steel pipes, bent into twin arches that rise 21.3 metres (70 ft) above grade, and suspend the deck by way of 44 stainless-steel hangers, each 50 millimetres (2.0 in) in diameter. The foundation consists of concrete-filled caissons which go down 30 metres (98 ft) below grade to the bedrock.

Designed in 1994 by Montgomery Sisam Architects of Toronto and Delcan Corporation (bridge engineers), it was constructed by Sonterlan Construction and is the recipient of numerous local architectural, design, and engineering awards. The bridge is situated at the mouth of the Humber River, the start of the "Toronto Carrying Place" trail, an ancient aboriginal trading route leading north, and thus features design elements and decorations such as carved turtles and canoes that evoke this native heritage.

The bridge forms an important pedestrian, recreational, and commuter cyclist link, and carries the Waterfront Trail, a multi-use pathway that will eventually parallel the entire north shore of Lake Ontario. The Toronto section is known as the Martin Goodman Trail and is one of the most popular pedestrian and cycling routes in the city.

The trail opened in 1984.[5] It was named for the President and Editor-In-Chief of the Toronto Star who died three years previously. In March 1992, the Toronto Star reported that the then 18 km trail was in the need of repairs, having potholes and a lack of signage where the trail did not yet have dedicated lanes.[6] Repairs started in June 1992 with a $200,000 facelift.

Since 2005, Waterfront Toronto has been responsible for filling in gaps in the trail, particularly along the central waterfront, and maintenance. In 2006, they added an extension to connect to Tommy Thompson Park on the Leslie Street Spit, something first proposed in 1989. Starting in 2008 and finishing in 2009, a new 1.3 km section of the trail opened up along Lake Shore Boulevard at Ontario Place The new section of trail converted 8,000 square metres of Ontario Place parking lots into green space and trail.

In October 2013, Premier of Ontario Kathleen Wynne announced government support for the expansion of the trail system to better connect the 2015 Pan Am Games venues and community.

I want to ensure that all of the people of this province benefit from our investments in the Pan Am and Parapan Am Games because that is how we can grow as One Ontario. Extending our trails system and connecting more communities is a great way for the excitement of the Games to live on well beyond 2015.

The announcement ensures that "the province will work with First Nation and Métis communities and organizations to incorporate Aboriginal markers along the trails to honour the history and culture of Aboriginal communities in Ontario."

All consultations related to Pan Am/Parapan Am trails will address accessibility requirements under the Accessibility for Ontarians with Disabilities Act.

In November 2013, two waterfront-design firms were selected to reimagine the space at the former Ontario Place grounds in Toronto to incorporate a broader mandate for greenspace and parkland.

Since 2013, the Trail has been growing radically, with expansions along the shores of Lake Erie, Lake Huron, Georgian Bay and Lake Huron's north channel, adding over 2000 km to its length.